Friends!  How exciting was this year’s Belmont Stakes with Kentucky’s newest star horse, Justify?  Already victorious in the Kentucky Derby and Preakness Stakes, suspense built all the way up to June 9th’s last leg of the Triple Crown, finding millions of us glued to the television not to mention those in attendance at the race, all of our hearts pounding…

Much to our delight, Justify and his jockey, Mike Smith, pulled it off for the win.  PLUS Justify was the second horse for trainer, Bob Baffert, to win the Triple Crown since 2015. (American Pharaoh)

I was thrilled to discover Eric Metaxas invited Elliott Walden into his studio on Monday, June 11th for the first hour of the show. (www.metaxastalk.com ). Elliott is the current President, CEO, and Racing Manager at WinStar Farms in Versailles, Kentucky. (www.winstarfarm.com )

We’ve been blessed to know Elliott over the years when his boys and our youngest son, Woody, played football together at Christian Academy. Fast forward a few years and my John got to be with Elliott again. They were two of ten men Bob Russell spearheaded to attend the first Businessmen’s Retreat at Country Lake Christian Retreat Center in Indiana.  (www.bobrussell.org ) Bob’s hosted three so far, and they’re planning on more.

Bob’s been mentoring young pastors from all over the country, teaching monthly retreats for several years since he retired from Southeast Christian Church. He also wanted to do the same for Christian men in the marketplace.

My John maintains their experience was worth a small fortune.  Bob brought in successful business entrepreneurs  and other ministers to share some of their insight as part of the program. Since their gathering, Elliott often sends out devotions he crafts, always centering around a Scripture verse to share with their fellow attendees.

In the radio interview, Eric begins talking with Elliott, sharing how he and his wife, Suzanne, enjoyed the race immensely. When he heard jockey  Mike Smith give all the Glory to his Lord and Savior, Jesus Christ, Eric shouted out a huge “Hallelujah!” 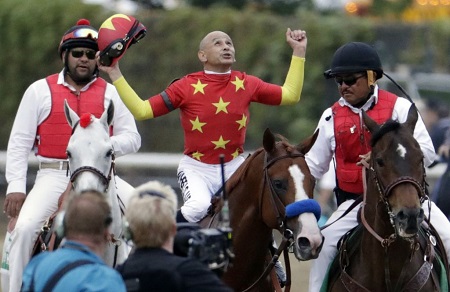 He continues by saying, “I’m a Jesus freak.” To which Elliott says, “So am I.”

Eric said, “I know that.” Christian fellowship at its finest, live on the air!

Elliott proceeds to show how Mike Smith truly walks the walk in his faith, always exalting the Lord and not himself. You’ll learn some jaw dropping tidbits throughout the interview PLUS you’ll get to hear from Mike Smith as well.  Learning of Mike’s faith and witness is heartwarming. What an encouragement to all of us!

A few examples you’ll want to listen for:

How long was Elliott a horse trainer before he got the opportunity to work for WinStar?
Who names these horses?
How do they come up with the names? (This part is fascinating.)
How much does Justify weigh?
How much does Mike Smith weigh? (Aren’t we glad we’re not all jockeys who have to STEP ON THE SCALE before every race?!!!)
How did Elliott wind up in the horse business?
How did Elliott beat Bob Baffert out of a win for another potential Triple Crown many years ago?
How long has Mike Smith been a Christian?
Hear why Mike thinks the Lord has blessed this horse so much…
Will Justify run in more horse races?
How much longer will Mike Smith, now 52, ride?

Run, don’t walk to your nearest iPad or phone or laptop and listen up.  You’ll be so glad you did.

To God be the glory.